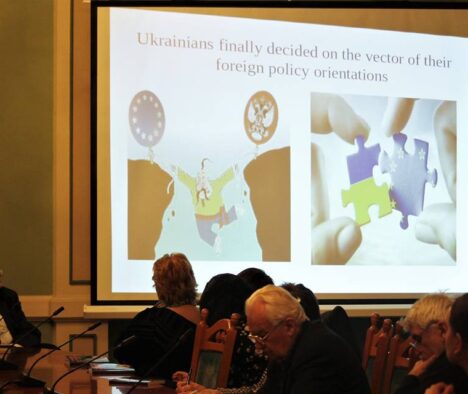 The Fulbright Program in Ukraine respectfully invites you to a presentation of the newly-released book Constructing a Political Nation: Changes in the Attitudes of Ukrainians during the War in the Donbas (edited by Olexiy Haran and Maksym Yakovlyev), which will take place at 6 pm on Thursday, March 15, at the Diplomatic Academy of Ukraine

Speakers will include: Dr. I. Bekeshkina, Prof. O. Haran, and Prof. I. Burakovsky. The presentation will be in English.

What effect did Russia’s attack have on Ukrainian society and on public opinion? And how, in turn, did they influence Ukrainian identity and politics? This book, prepared by the School for Policy Analysis, National University of Kyiv-Mohyla Academy with the Ilko Kucheriv Democratic Initiatives Foundation, shows that contrary to the Kremlin’s expectations, Russian aggression has in fact led to a strengthening of the Ukrainian political nation. The book covers national and regional dimensions of changes in the attitudes of Ukrainians during the war in the Donbas: identity issues, political and party preferences, approaches to decentralization and the conflict in the Donbas, economic tendencies, changes in foreign policy attitudes toward the EU, NATO, and Russia. In the afterword to this book, possible scenarios for Ukraine’s future policy toward the occupied territories have been presented.

The first edition appeared in March 2017 in Ukrainian. This is now the second, updated edition and the first in the English language.