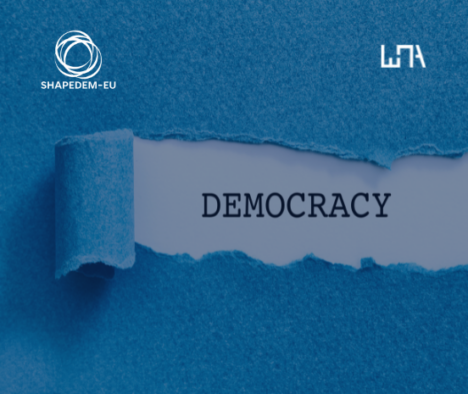 In 2022-2025, School for Policy Analysis NaUKMA, together with a network of prominent international partners, will implement a three-year project “Rethinking and Reshaping the EU’s Democracy Support in its Eastern and Southern Neighbourhoods” under the support of the Research Executive Agency of the European Commission within the Horizon 2020 Framework Programme.

The consortium represents a multi-national and multifaceted research consortium of academic, think tank, and civil society institutions based in the EU and the Southern and Eastern Neighbourhoods. The project aims at rethinking, reshaping, and reviewing the existing EU’s democracy support policies in its Eastern & Southern Neighbourhoods. The research team applies an entirely novel approach which conceives of democracy support as a social practice requiring the collective democratic learning of all stakeholders involved. The consortium will apply mixed-methods to collect, assess, and generate policies related to democracy support in the six case countries: Ukraine, Georgia, Armenia, Lebanon, Tunisia, and Palestine. The researchers will investigate the role of EU member states, key EU institutions, third country actors, and international organisations, which, in turn, will lead to improved EU practices in the region.

Outcomes of the project will contribute to the creation of sustainable tools for an EU policy toolkit that supports democracy in its Southern & Eastern Neighbourhoods, thus increasing the EU’s accountability, transparency, effectiveness, and trustworthiness and making neighbourhood countries more resilient, equitable, and responsive to local needs.