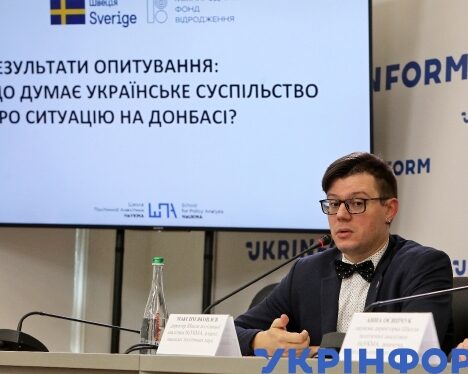 Results of Survey “What Does Ukrainian Society Think About Situation in Donbas?”

On November 1, presentation of the survey on the public opinion regarding the situation in Donbas, possible ways to resolve it and the attitude to different categories of people involved in the conflict took place in the Ukrinform news agency.

The survey was conducted by the Kyiv International Institute of Sociology commissioned by the School of Policy Analysis NaUKMA.

In the course of the survey, we were interested in the opinion of the Ukrainian population regarding which cultural and social reintegration instruments should be used, and whether certain aspects of the state policy on internally displaced persons (IDPs) need to be changed. In addition, the expectations of Ukrainians on the situation in case the non-government controlled territories return under the control of Ukrainian authorities, as well as on views on how the Ukrainian state should build its policy towards different categories of people living in the temporarily occupied territories (TOT).

The survey was conducted within the framework of the Initiative for development of think tanks in Ukraine, implemented by the International Renaissance Foundation (IRF) in partnership with the Open Society Initiative Foundation for Europe (OSIFE) with the financial support of the Embassy of Sweden in Ukraine.