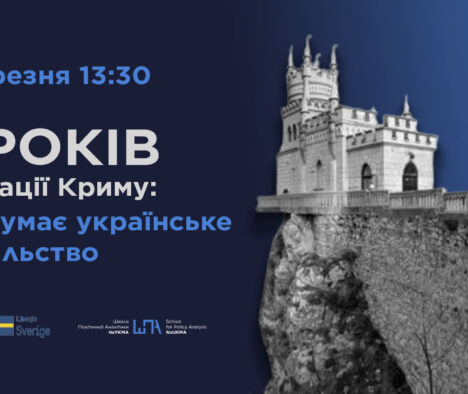 Seven years of illegal occupation of Crimea: What do Ukrainians think?

February 26 marks the Day of Resistance against the Occupation of the Autonomous Republic of Crimea and the City of Sevastopol. On this day, in 2014, thousands of Crimeans rallied in support of the territorial integrity of Ukraine.

In Crimea, under Russia’s occupation, now in its seventh year, political persecution of dissenters, repressions against the Crimean Tatars, and attempts to destroy the Ukrainian Orthodox Church persist. At the same time, Crimea is underrepresented in Ukrainian media and in the public debate.

The School for Policy Analysis NaUKMA conducted a series of surveys between March 2020 and January 2021 that put Crimea in the spotlight. Survey results, shaped into an analytical report were presented at Ukraine Crisis Media Center. We’ve picked the highlights, read on.

Crimea’s status after de-occupation. The survey asked Ukrainians what status should be given to Crimea after Ukraine’s sovereignty over the peninsula is restored. The pollster asked respondents to choose between several options. Thirty-seven per cent say Crimea should go back to “the pre-occupation status of the Autonomous Republic”, and 27.5 per cent say it should become “an ordinary region without a special status.” That’s two times higher than the share of respondents that favor the Crimean Tatar autonomy (14.6 per cent). The results show that Ukrainians are wary of changes.

De-occupation scenarios. According to the scientific director at the School for Policy Analysis NaUKMA Anna Osypchuk, a vast majority of Ukrainians say that de-occupation of Crimea by military means is not acceptable.

The pollster asked respondents twice whether they support the water shutoff – in March and in September 2020. The September data show a slight decline (3.3 per cent) in the number of Ukrainians who strongly or somewhat agree that Ukraine needs to restore water supply to Crimea – 29.8 per cent versus 33.1 per cent in March. At the same time, the share of respondents that strongly or somewhat disagree with the statement almost did not change – 39.8 per cent in September versus 36.4 per cent in March. Those who strongly disagree are 27 per cent and 28.5 per cent respectively. Thus, disagreement with restoration of water supply prevails.

Education and health services reflect integration efforts. An important component of Ukraine’s policy towards its people in the temporarily occupied territory is implementing fast-track education and health services. Four-in-ten Ukrainians (46.3 per cent) say Crimeans should have simplified access to passport services (including national passport, ID card, and international passport). The share giving “don’t know” or refusal-type answer is 15.3 per cent. While 17.4 per cent expressed a mix of agreeing and disagreeing, 10.4 per cent strongly agree and 10.6 per cent somewhat agree with the statement.

More than four-in-ten Ukrainians (45.7 per cent) strongly (19.5 per cent) or somewhat (26.2 per cent) agree over providing fast-track access to health services for the residents of the temporarily occupied Crimea. About half as many (22.5 per cent) disagree, 13.3 per cent say they don’t know, and 18.5 per cent both agree and disagree. The survey was conducted in March 2020, and does not fully reflect the COVID-19 pandemic.

Ukrainians welcome the government measures set to support the residents of the occupied peninsula, but some have minor concerns over losing their own benefits.

Ukraine’s information policy on Crimea. A majority of Ukrainians are critical of the government’s cultural and information policy on Crimea. About half say that Ukraine must take a more active stance on raising international awareness about the repressions against the religious communities in Crimea and in the occupied Donbas. More than half of Ukrainians (52.1 per cent) agree that the state has to step up its support to the Crimean Tatar language and culture.

There is a shortage of information about Crimea in the rest of Ukraine, co-founder of the national platform “Dialogue on peace and secure reintegration” Yulia Tyshchenko said. “As we measured the Crimea-related content in Ukrainian media, we found that the weather forecast tops the list. That’s not a joke. The content about Crimea is shrinking.” According to Serhiy Mokreniuk, head of the analytical department of the Regional Human Rights Center said insufficient efforts by the government are key to the information shortage. “NGO Institute of Mass Information surveyed the Crimea-related content, its origins, and sources. Only nine per cent of the data originated from the news releases by the government agencies. Ninety-one per cent of the news pieces quote sources such as Facebook posts and Telegram channels,” Mokreniuk said.